There are 13 posts in total.

The Crumbling of Parliament

So everybody laughed yesterday at the House of Commons being suspended yesterday because of water gushing in through the ceiling. But here's the thing.

The Palace of Westminster is an historic building, part of our nation's heritage. Like all our other historic buildings it's supposed to be held in trust and protected, just like the buildings and monuments from ancient history have been by their civilised custodians.

The occupants of the Palace of Westminster have know for years that the building is literally crumbling around them - not only do all the utilities within a working building need upgrading, the masonry itself is falling apart - on a near-monthly basis a piece of the stonework will fall off and come crashing to the ground. But the elected occupants have for years prevaricated about coming to a decision on what to do about it. Everybody knows what actually needs to happen is they all need to decant to somewhere else entirely for a couple of years whilst a relatively short and relatively cheap complete repair and upgrade job is done, all in one go. But a sizeable number of MPs don't want to do that, they want to instead spend a couple of decades, and considerably more money - your money and my money, which could be spent on the NHS instead - on a bit by bit repair and upgrade programme, closing off sections of the building and re-opening them bit by bit.

So because they've been unable to agree on how the [...]

Read the rest of The Crumbling of Parliament.

Brexit - what should happen next

The country and Parliament have failed to agree, and it's pretty clear they never will agree; the wheels have fallen off the Brexit train not least because the people who voted for and campaigned to leave have been unable to agree amongst themselves what 'leave' actually means. Here's what should happen next:

Revoke Article 50, make it clear to the Leave folks that the matter is not ended, spend the next two years trying to do what David Cameron failed to do at the beginning of 2016 (whilst the EU might be a bit more predisposed to grant the concessions they told him to whistle for back then, having seen that the UK actually is stupid enough to jump off a cliff if it so desires), also spend the next two years fixing some of the problems - including the UK's own botched implementations of EU directives and regulations - which led to the slender Leave victory in the first place, put the matter to The People again in a binding referendum with a properly fairly agreed franchise and a realistic enhanced majority threshold (55% / 45% seems reasonable enough), and implement any subsequent second Leave victory in an orderly manner with a National Unity Government rather than a minority leader behaving like they've got an absolute divinely-sanctioned majority.

Nobody could argue such a course would be undemocratic, because the procedure would be legally binding from the outset, and all but the minority extremists on both sides will get what they want, [...]

Read the rest of Brexit - what should happen next.

This, by or via Facebook user Jane Cody, is currently being widely shared around Facebook; reproduced here as fair use to allow people to see it without having to login to Facebook.

LEAVER: I want an omelette.

REMAINER: Right. It’s just we haven’t got any eggs.

LEAVER: Yes, we have. There they are. [HE POINTS AT A CAKE]

REMAINER: They’re in the cake.

LEAVER: Yes, get them out of the cake, please.

LEAVER: Yes, but that cake has got icing on it. Nobody said there was going to be icing on it.

LEAVER: And there are raisins in it. I don’t like raisins. Nobody mentioned raisins. I demand another vote.

REMAINER: I told you, the eggs are in the cake.

LEAVER: Well, get them out.

JEREMY CORBYN: Yes, get them out now.

LEAVER: Yes! You just get them out and then you make an omelette.

REMAINER: But how?! Didn’t you give this any thought?

LEAVER: Saboteur! You’re talking eggs down. We could make omelettes before the eggs went into the cake, so there’s no reason why we can’t make them now.

Read the rest of Brexit, omelettes, and eggs.

Any Tory-leaning folks care to trying to defend the health secretary having a £44,000 private bathroom fitted in his office at the same time as ordering £21,000,000,000 of cuts to the health service? 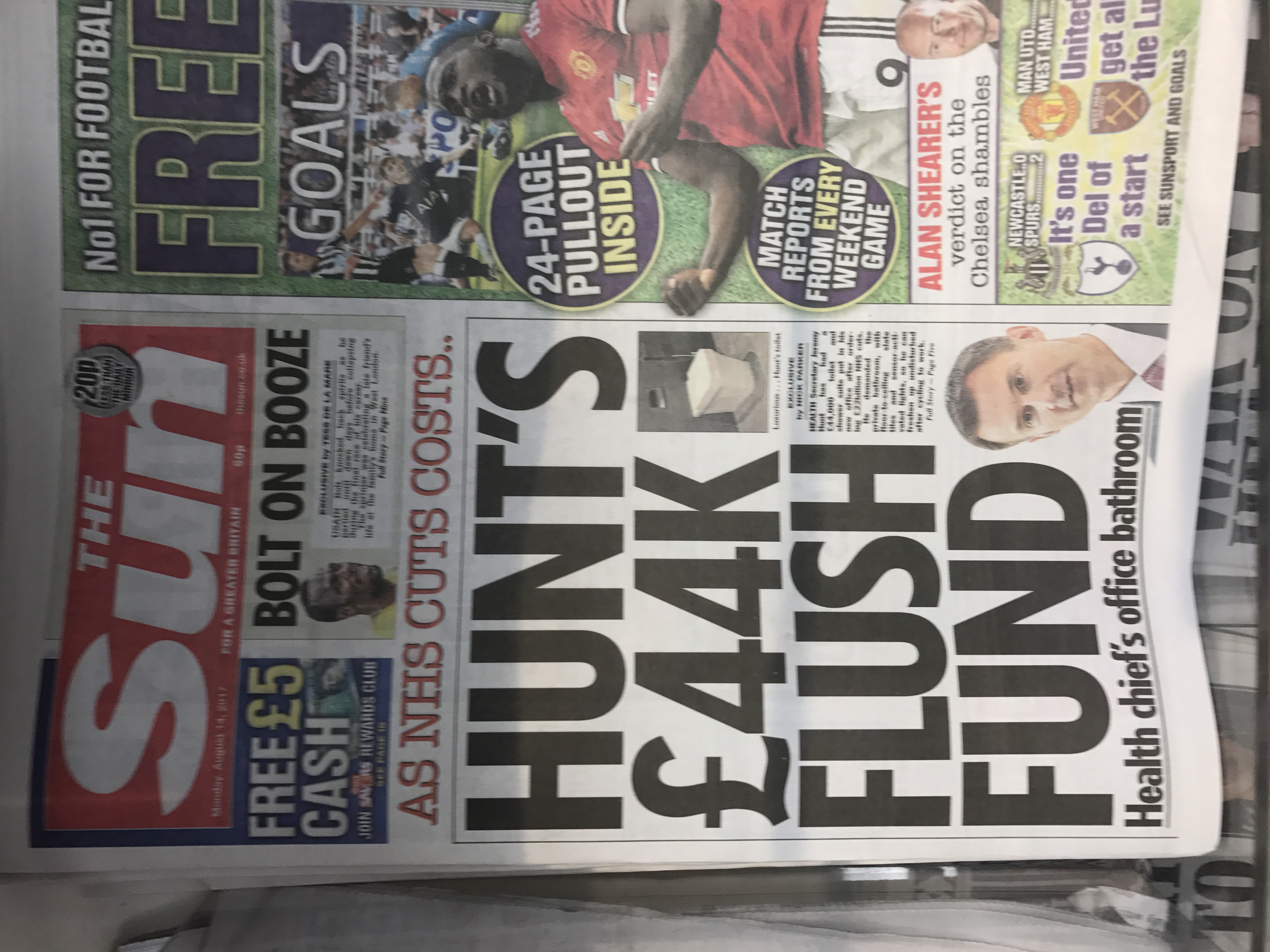 Read the rest of NHS cuts and private bathrooms.

It could be the dead wot won it

According to the polls - varying widely between an increased majority for the Conservatives down to a hung parliament, with one little-reported poll (done by an ad agency rather than a traditional polling organisation, but with a track record of getting its guesses right) even showing a Labour win, the election is too close to call. The fact of there being such a wide variation in the predictions in the final polls from each organisation is evidence enough it's too close to call, even with some polls predicting a big Conservative win.

With it this close to call, there's one demographic nobody has thought of who could win it. The dead.

In the olden days it was a pretty tricky process to get a postal vote - you had to satisfy your local elections office, and even prove so, that it would be physically impossible for you to get to the polling station on Election Day. More recently in an effort to boost turnout the requirements were dropped, and postal voting was made available on demand to anybody who asks for it.

So it's feasibly possible that there are people who applied for postal votes, sent them in, and died before [...]

Read the rest of It could be the dead wot won it.

Here's my handy cut out and keep guide to effective political campaigning:

What this means is that when campaigning - whether that's going into the lair of the other side or what one posts into one's own timeline - you need to craft your message in such a way that it'll appeal to the uncommitted / undecideds.

Calling the other side a bunch of nasty loony idiots, or posting pictures of their leader looking ugly next to pictures of your leader looking inspirational, might make you feel good and get you lots of Likes from your side's supports, but as a campaigning method it's probably the worst thing you can do. Insulting the uncommitteds on the other side is only going to turn them into committeds, and make the undecideds more likely to swing away from your side than towards it.

Read the rest of Political campaigning. 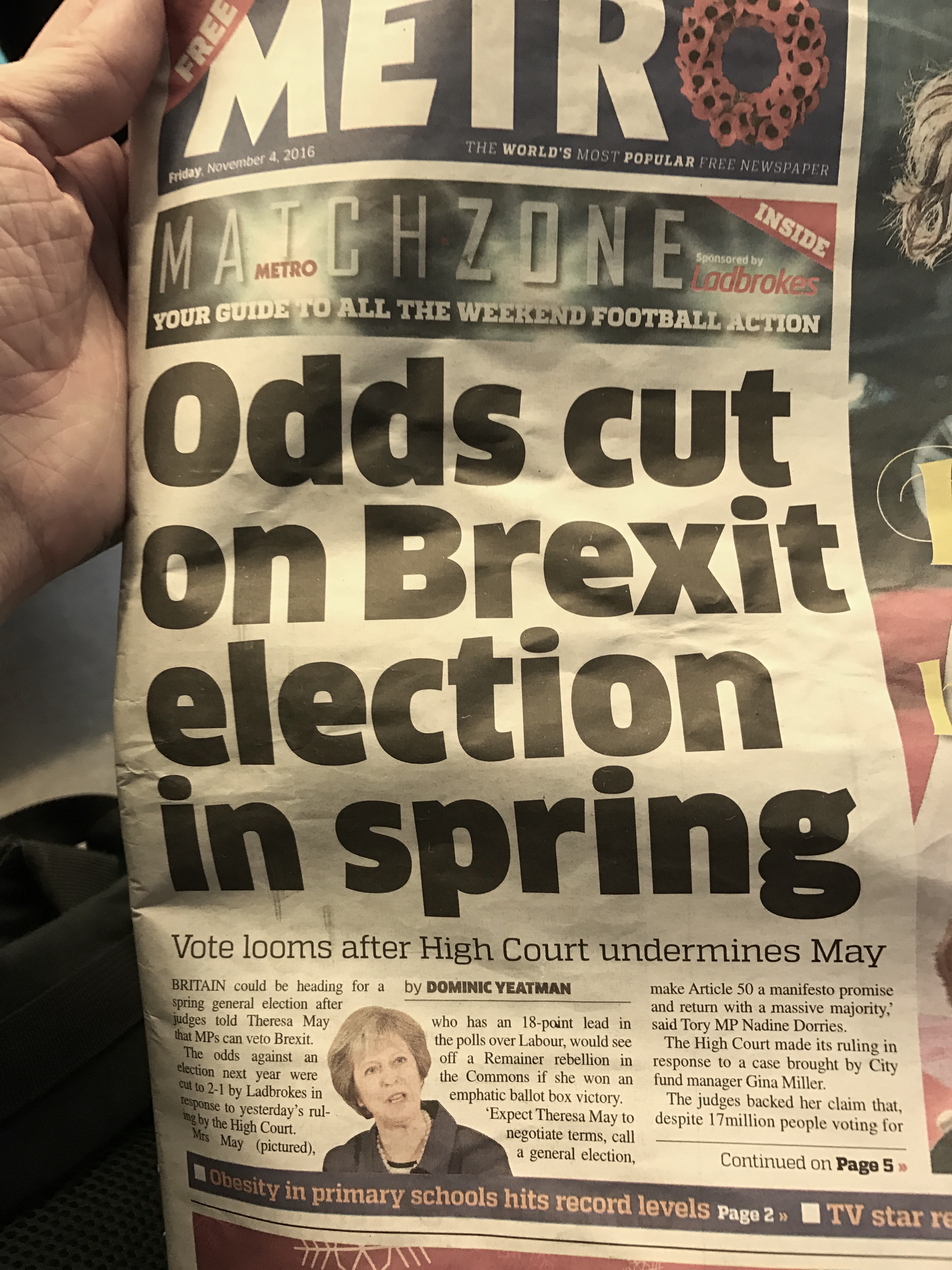 The state of the Labour Party in 2016

The Labour Party should just split and be done with it; let the voters choose which wing of the party they prefer - https://www.theguardian.com/politics/2016/sep/25/jeremy-corbyn-critics-will-not-be-silenced-despite-unity-calls

Read the rest of The state of the Labour Party in 2016.

Two years on and approaching the end of a referendum campaign about whether or not to stay in the EU, rather than there having been any real attempts to explain the EU properly, rather than either side having any interest in engaging in an actual debate on the matter (the national broadcasters [...]

Read the rest of The UK's EU Referendum Will Help You Lose Your Faith In Politics.

So to summarise yesterday’s election results: all the parties did as well as could be expected, all the other parties underperformed considering where we are in the electoral cycle, and the UK will probably vote to leave on 23 June.

Read the rest of Election results.

Local election 2016 - who to vote for in Bournville ward?

Although Cotteridge and Stirchley (or as I call it, Stirchleyridge) is what the estate agents call an Up and Coming Area, we're still not hip enough to have our own local election hustings - we still have to leave that prestige to Moseley. Unlike some parts of the city, we do at least get campaign literature - from some of the candidates, at any rate.

I've read what they're promising, so you don't have to.

Mary is not a sitting councillor, but she's representing the sitting administration, the Labour Party, for a ward which has one of its three councillors as Labour; depending on what issue it is which is most offending voters by this Thursday, she's in with a reasonable chance of being returned elected. What's she pledging to do, then?

Read the rest of Local election 2016 - who to vote for in Bournville ward?.

So here's my analysis of what happened the last couple of days:

Read the rest of General Election 2015.