Given how often They have to Rewrite The History Books, you'd think they'd abandon the book format entirely and just use a wiki instead

Read the rest of Rewriting the History Books.

In the aftermath of the referendum vote to leave the European Union, one of the things being focussed on is a petition (which ironically was created a month before polling day by a Leave supporter when it was looking like there would be a likely Remain win) calling for a second referendum. At over 4 million signatures it is probably the most-signed petition in history. Or at least it would be, if those signatures were valid.

Suspicions started to be raised when somebody had a look at the raw open data JSON feed for the petition and noticed there were a number of signatures appearing to come from the UK - including more signatures from certain countries than those countries' populations! The Government Digital Service is already investigating these potentially fraudulent signatures and removing them.

As much for a programming exercise to learn how to parse a JSON feed as anything else, I decided to make a tool to make that country data human readable, and display on a pie chart what the proportion of UK to non-UK signatures might be, and how significant that proportion might be.

So the tool is at https://perfect-curve.co.uk/toys/petition, and on there you can see a live real-time feed of signatures as they are logged in the system after a user follows the confirmation email..

The first thing to note is the proportion of (notionally valid) UK-sourced signatures vs (notionally invalid) non-UK signatures, at 96% UK to 4% non-UK; i've done some checking with other petitions [...]

In a previous job role on the main corporate webteam for a local council, one of my main focuses was on website content strategy, for the Birmingham City Council website; towards the end of that role (before the team itself was fundamentally changed in a departmental restructure) I completed the first draft of that strategy. As departmental and corporate priorities have shifted my original document has been changed and expanded considerably, but I thought it seemed worthwhile sharing it here for the wider community - the Local Government Digital community and any other public / third / educational sector digital community to use as a basis for their own work on developing content strategies.

It is high-level, strategic in nature; its goal is to outline principles to be followed when creating content; although there are some specific matters of detail towards the end of the document, a content strategy should not be expanded into a highly detailed how-to guide for creating content or checklist for evaluating it - such detailed information is best contained in separate documents rather than expecting content designers to read and absorb one large all-encompassing document.

Many of the principles outlined are taken from the work of others, most notably the Government Digital Service’s Style Guide and LocalGovDigital’s Content Standards, and further details can be found there.

‘…the practice of planning the content creation, delivery, and governance…’

Read the rest of A content strategy for local government.

Two years on and approaching the end of a referendum campaign about whether or not to stay in the EU, rather than there having been any real attempts to explain the EU properly, rather than either side having any interest in engaging in an actual debate on the matter (the national broadcasters [...]

Read the rest of The UK's EU Referendum Will Help You Lose Your Faith In Politics.

A recipe for what I am going to call Sushish: 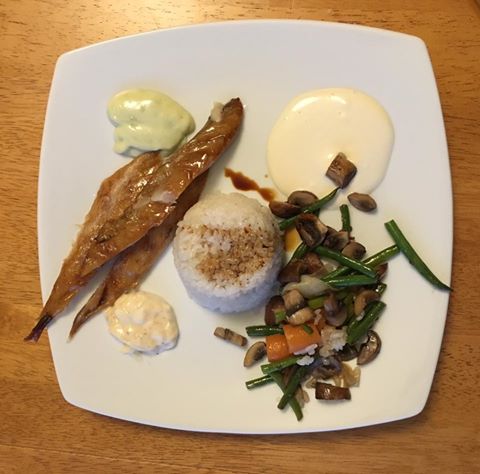 Start your sushi rice cooking by your favourite method of cooking rice - mine is to steam it in a steamer, with a slight dash of sesame oil mixed into it. Chop your carrots to the size you like them and include them in the rice bowl / pan - leave them at the top, because you'll want to lift them out separate from the rice.

Prepare your mayonnaise sauces - take three small bowls, putting a dollop of mayonnaise in each, and mix in to one of each to your preferred taste a squirt of wasabi paste, a splash of yuzu sauce (or lemon juice if you can't get yuzu), and a blob of fish paste. If you want to try different mayonnaise sauces, or a different number of sauces, do accordingly according to how you feel.

Chop your green beans, mushrooms, spring onions, and ginger to the size and shape you like them to be, and stir fry them - test the carrots, and when they're nearly done fish them out of the rice pan and add to the stir fry pan.

If you're having your smoked mackerel hot, you'll be wanting to start heating it up sufficiently long before everything else is done that it's nice and hot, but not so long before that you're going to end up [...]

So to summarise yesterday’s election results: all the parties did as well as could be expected, all the other parties underperformed considering where we are in the electoral cycle, and the UK will probably vote to leave on 23 June.

Read the rest of Election results.

Local election 2016 - who to vote for in Bournville ward?

Although Cotteridge and Stirchley (or as I call it, Stirchleyridge) is what the estate agents call an Up and Coming Area, we're still not hip enough to have our own local election hustings - we still have to leave that prestige to Moseley. Unlike some parts of the city, we do at least get campaign literature - from some of the candidates, at any rate.

I've read what they're promising, so you don't have to.

Mary is not a sitting councillor, but she's representing the sitting administration, the Labour Party, for a ward which has one of its three councillors as Labour; depending on what issue it is which is most offending voters by this Thursday, she's in with a reasonable chance of being returned elected. What's she pledging to do, then?

Read the rest of Local election 2016 - who to vote for in Bournville ward?.

In which the CEO of an online advertising company admits to routinely using Adblock - http://www.telegraph.co.uk/technology/2016/04/19/ad-blockers-are-breaking-the-internet-study-finds/

Read the rest of Breaking the internet.

And in other news - Berlin currywurst seller calms thief with leftover potato salad.

So the question is, is a prime minister inheriting ambiguously taxed wealth the kind of thing which brings down a government? #panamataxcanal

Read the rest of Tax in Panama.

Minor iOS updates seem to be coming along with the same tedious regularity of iTunes updates these days.

Read the rest of iOS updates.

If you want the best potatoes you've ever had, try these:

Take a load of waxy potatoes (eg Charlotte), peel them, and cut them in half lengthways.

Put them in a pan just big enough to hold them all as one layer, together with a massive blob of ghee (or butter if you live somewhere that doesn't know what ghee is). Heat the pan to melt the ghee, then add enough water to cover the potatoes - and crumble in a vegetable stock cube. Reduce the heat and simmer until the potatoes are cooked, adding some Herbes de Provence towards the end. The water will boil off, leaving them continuing to cook in the ghee.

Optionally, after cooking and before serving, put them in an oven at 220°C for a few minutes to crisp up the surfaces.

Read the rest of Potatoes fondante.

Standing by the button on a busy pedestrian crossing and not pressing it - there really should be a law against it.

Read the rest of Antisocial pedestrians.

Stewart Lee likens being a comedian to being a prostitute - providing a service people crave yet are despised for. 'At least people don't write in to prostitutes to say they could have done it better'. Sounds like being part of a webteam, really.

Read the rest of Comedians, prostitutes, and webteams.

An SDS hammer drill is definitely the tool of choice for drilling into a wall. Srsly, every home should have one.

A web strategy for local government

"There will come a time soon when for some councils there won't be a council website any more - the website will be the council" - Tom Steinberg, founder, MySociety

Purposes of the strategy

The stakeholders of the council web estate are:

These stakeholders each have a variety of different transactional, informational, and marketing needs from the site, some of which may on the [...]

Read the rest of A web strategy for local government.

Seen on Twitter last night - a company selling insurance against one's Wordpress installation being hacked. If the Wordpress security landscape has got so bad that people need insurance to pay for recovery after a potential hack, I'd say it's time to stop using Wordpress. #internet #webdev

Read the rest of Wordpress security.

That moment when you’re making the separate dinner for the deBaby because yours can’t be babified & think ‘i wouldn’t mind that for myself’.

(cabbage, red pepper. onion, cumin seed, and caraway seed, since you were wondering)

Read the rest of Baby food.

I’ve come home to a news story that apparently the Russians spied on Mao Tse-Tung’s poo. It’s a glorious life, the life of a spy.

Read the rest of Spooks.

END OF THE IPHONE AND IMMINENT COLLAPSE OF APPLE KLAXON!!11!!